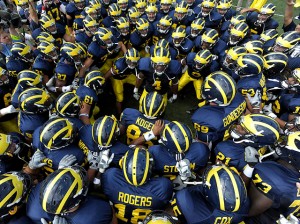 On Saturday September 6th my Alma Mater the University of Michigan Wolverines fell to the Notre Dame Fighting Irish.  “Fell” is unfortunately a euphemism.  Going into the game sports analysts would tell you the teams were evenly matched.  Some sportscasters, like Lee Corso and Kirk Herbstreit, even picked UM to win the game.  I believed either team could pull off the victory, though it would likely be a close game.  Well, we were wrong.

I gathered a few friends to watch the game.  Snacks were out.  Drinks were poured.  Anticipation for another great rivalry game was building.  After all, this would be the last time in the foreseeable future that UM-Notre Dame would play.  Finally the game began.  As each quarter of the game rolled by, I sunk deeper and deeper into my recliner.  I said fewer and fewer words to my friends and yelled more and more angry words at the television.  3 interceptions.  1 fumble.  2 missed field goals.  No red zone opportunities.  Say what?

31 points for Notre Dame.  Big ol’ Goose Egg for UM. You’ve got to be kidding me.

I woke up Sunday morning and started to prepare for church.  Took a shower.  Brushed my teeth.  Ironed my pants.  Ate cereal.  And all the while I had a sinking feeling in my stomach.  Because my team lost a big game.

That sinking feeling in my stomach wasn’t due to the 750 thousand abortions that have occurred in the United States this year.

I wasn’t chewing my Honey Nut Cheerios in silence because I was grieved over a recent cancer diagnosis of a sweet 3 year old girl in our congregation.

I wasn’t down because 98% of residents on the South Shore of Boston don’t attend a gospel preaching church.

I wasn’t feeling blue because of the ISIS attacks on Christians in northern Iraq.

I wasn’t bummed about the reality of sex trafficking in my own state, let alone in other parts of the US and world.

I wasn’t disappointed because I hadn’t served my wife as I should, or treated a friend poorly, or missed an opportunity to share the gospel with a neighbor.

No, I was shaken up because a bunch of unpredictable 18-22 year olds at my old school couldn’t pull off a sports victory.

Somewhere on life’s long list of disappointments – far, far, far down on the list – is the University of Michigan Football team’s loss to the Notre Dame Fighting Irish on September 6th, 2014.  In view of the divine grand scheme of life, it shouldn’t feel like a big loss.  It should feel more like a mosquito bite or paper cut.  Just a little annoying.

May our disappointments always be shaped by the reality of a sin-warped world, the horrors of hell, the holiness of God, the hope of salvation in Christ, and the beauty of life on the new earth.